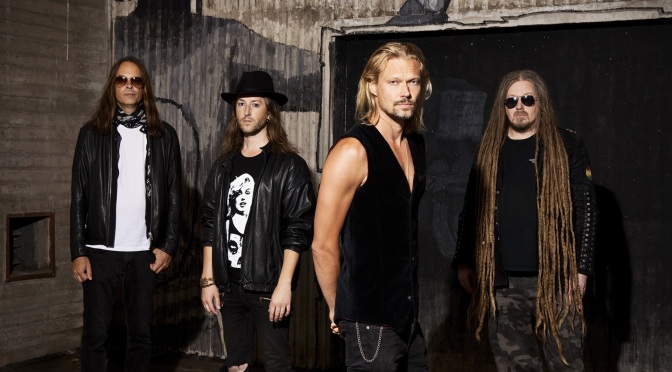 Flat Earth got off to a very notable start with their debut “None for One”, instantly gaining attention around the globe thanks to their well known members who have some of the most remarkable achievements in the Finnish music history under their belts. The new transformation of the quartet will see Wille Granö replacing ex-drummer Mika “Gas Lipstick” Karppinen behind the kit.

“We are excited to have Wille joining the band, we played one acoustic show with him and things just started rolling so smoothly that we decided to continue from there. Wille is a great guy to play with, totally hassle free and he brings new kind of vitality to the post-corona version of the band, Flat Earth’s Niclas Etelävuori, Mikko “Linde” Lindström and Anthony Pikkarainen comment on their new drummer. Wille has known Niclas for years and says that he already sees “Tony” and Linde as his brothers despite the short time they’ve been together.
“When Niclas called me and asked if I could fill in for some percussion for one show I didn’t even know he was talking about Flat Earth. I was completely over the moon when I realized what the case was. The show went really well and the guys were like: “Hey, you wanna play some more?” Everybody had real good vibes and all of a sudden Niclas just offered his hand and said “Welcome to the band”. I’m grateful and really stoked about this gig and my new family, says Wille Granö.
The three original members of Flat Earth praise Wille’s talents as a drummer. Especially his ability to modify and excel in different styles has brought the band new dimensions to exploit in their live shows as well as on record in the future.

Get the new album from HERE

Check out the lyric video for “Every You” taken from the new album below:

WATCH ABOUT THE SONGS VIDEOS – HERE