A series of inspired encounters between creative forces from various worlds of sound and vision has resulted in “Hunter’s Moon,” the infectious first new track from GHOST since 2019’s Seven Inches Of Satanic Panic, and its phantasmagoric video directed by Amanda Demme.

END_OF_DOCUMENT_TOKEN_TO_BE_REPLACED

The moon, an autumnal atmosphere, fog in the woods, vampires and a wicked storyteller – as an 80s horror fan you’ll get everything you desired by watching the cinematic new video clip for WITHERFALL’s “As I Lie Awake”. The video was directed by the renown director Zev Deans who didn’t just do spectacular videos for the likes of Ghost, Behemoth or Chelsea Wolfe, but also Denzel Curry and St. Vincent.

END_OF_DOCUMENT_TOKEN_TO_BE_REPLACED

It’s only few days until Swedish occult rock band Ghost release their new album “Prequelle” on June 1st.  The Band has been touring since may 5th and we’ve seen their new front man Cardinal Copia and the reinstatement of all three Papas during the “Rats On The Road!” Tour .

Tobias Forge promised his group will be bigger and better for the tour and to those who haven’t seen them a live yet, here we can see that there are actually seven ghouls! Or Ghouls & The Ghoulettes .

What do you think this new line up? Is it better or ?

END_OF_DOCUMENT_TOKEN_TO_BE_REPLACED

Ghost have unveiled the studio-recorded version of “Dance Macabre”

Ghost‘s new album Prequelle is out on June 1 and the band start  North American tour on May 5 in Riverside, Calif. Also band announce first ever Arena shows as a headliner.

Founder and frontman Tobias Forge promises his group will be bigger and better for the tour according the recent interview with the billboard.

“It will definitely be an upgrade,” Forge, who will be introducing his new character Cardinal Copia, tells Billboard.”

“We have a bigger band now in terms of personnel,” Forge says, “so it’s way more live now. Before we were doing a little bit of the modern trickery, with backing tracks and stuff to make the whole sound a certain way. Now we’re taking that away so we’re a little more like a Springsteen or Guns N’ Roses sort of band with backup singers and everything. It feels great. It’s gonna be the best version yet — but there’s still a lot to come after that.”

END_OF_DOCUMENT_TOKEN_TO_BE_REPLACED

Ghost revealed their new frontman Cardinal Copia earlier in april in a series of video clips. Right after that the band posted first single “Rats” with the video.

GHOST have released a New video announcing the reinstatement of all three Papas.

Papa Emeritus I, II & III are dead and the embalmed bodies to be displayed during 2018 tour.

The new message from the clergy announcing the reinstatement of all three Papas in a video which  also includes new music from Ghost’s upcoming album Prequelle. 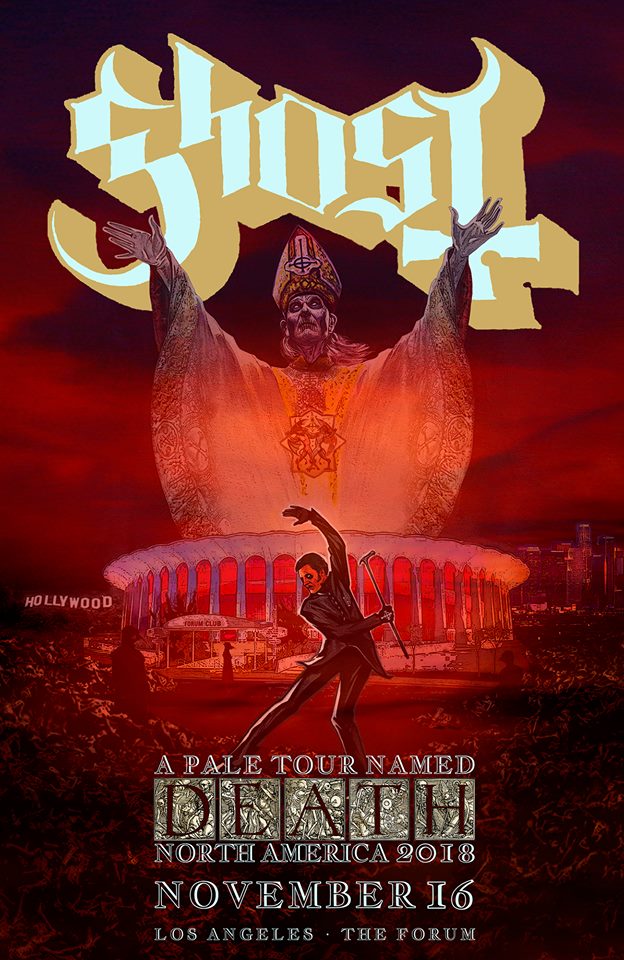