Harrisburg, PA based Heavy Rock band ETERNAL FREQUENCY has released the official music video for their cover of the 1990 NINE INCH NAILS critical and fan favorite Industrial Rock classic, “Head Like a Hole.” A faithful rendition of the 1990 hit single, the band balances the inherent rage of the original with front-woman Emelle Elizabeth’s soaring vocals, resulting in a refreshed anti-anthem that continues to ring relevant in today’s society.

END_OF_DOCUMENT_TOKEN_TO_BE_REPLACED

Unmatched technical progressive metal band ONI have publicly cited Linkin Park as a longtime influence, and after the recent untimely death of vocalist Chester Bennington, the band decided to enter the studio to record a cover track and pay homage to their fallen musical hero. Right now, you can stream ONI‘s metal-charged cover of the classic Linkin Park track, “A Place For My Head”, here:

END_OF_DOCUMENT_TOKEN_TO_BE_REPLACED 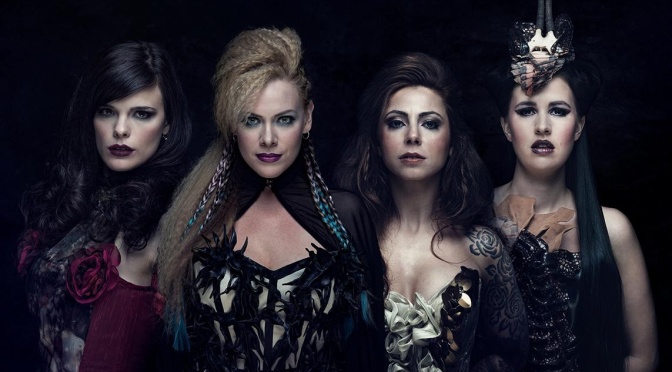 EXIT EDEN is the new Symphonic Metal All-star Band featuring charismatic singers Amanda Somerville, Clémentine Delauney, Marina La Torraca and Anna Brunner. Despite their diversity, these 4 singers blend together personally as superbly as they do vocally and this constellation creates extraordinary and powerful ideas. The highly anticipated debut album “Rhapsodies in Black” will be released this Friday, August 4th via Napalm Records (worldwide, with Germany/Switzerland/Austria via Starwatch).

Amanda commented on the track:
“The outpouring of affection from you all has been so incredible that we wanted to give you a little early treat before the album release tomorrow.
We would never leave you incomplete!
So here it is, folks: our newest video with… “Incomplete!” ”

END_OF_DOCUMENT_TOKEN_TO_BE_REPLACED

Russian post-black metallers SECOND TO SUN have released a cover version of “The Wolven Storm (Priscilla’s Song)”, a track featured on the videogame “The Witcher 3: Wild Hunt”.

The band comments: “A’right, lads and lasses, we are overjoyed to give ye our cover version of the Wolven Storm (Priscilla’s Song) from Witcher 3!”

“This cover is pretty consistent with the sound of our “Blackbound” [2016] album. Unlike the majority of the covers of this song, where most of the attention is targeting Priscilla, lyrics and visuals, we have concentrated on the musical aspect and have attempted to create a dark and impressive soundtrack to the final game credits. I hope we’ve succeeded!”

Listen to the track at this location:

“If you are a fan of Paramore/State Champs…or just like punky alternative Rock, You will love this band! Solid song, catchy, powerful vocals… I have a feeling you’ll be hearing a lot about this female fronted masterpiece they call Light It Up.” – Worldwide Underground

CONNECTICUT | JUNE 5TH, 2017 – New England alternative rock band shows off the power of transformation in their newest release, an edgy version of Halsey’s “Eyes Closed.” Compared to the likes of Bring Me The Horizon, PVRIS, and Paramore, lead vocalist Gina Fritz puts on a wickedly compelling performance. Their version of “Eyes Closed” is the first taste of their upcoming transition into a new sound. A soft intro, slick guitar licks, and a solid combination of pop and alternative; Light It Up is successfully creating a unique sound that has a small bit for any type of listener. About the cover, the band states:

“”We are super excited to to release our cover of ‘Eyes Closed’ by one of our favorite artists, Halsey. From the minute we heard the song we knew it was a perfect way to transition ourselves to the ‘new’ Light It Up. Keep your eyes and ears open for tons of new content coming from us this summer!”

Light It Up is a five piece female fronted alternative rock band from the suburbs of New Haven, Connecticut. After only being a band since September 2016 Light It Up is on the way to making a name for themselves. With the band building a strong following on social media and being featured on one of Connecticut’s number one radio station they are off to a great start. Light It Up has a few tours under their belt as well as supported national touring acts such as We The Kings, Hawthorne Heights, Metro Station and Cute Is What We Aim For and many more! “Eyes Closed” is available NOW.

To stay connected with LIGHT IT UP, visit the social media links below: