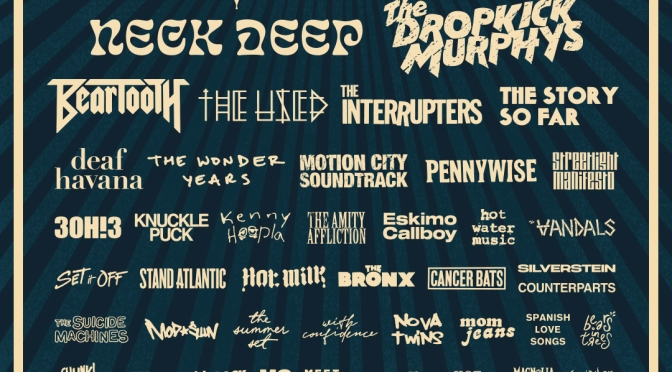 Slam Dunk festival is impressively heading into its 16th year and has been bringing the best punk, rock, metal and alternative acts since its inception and has grown bigger each year, and this year it boasts one of its biggest line-ups to date. Starting in a single venue, it is now held across two outdoor sites in Hatfield Park (South) and Temple Newsam Park in Leeds (North). Slam Dunk Festival 2022 will take place on Friday 3rd June (North) and Saturday 4th June (South), moving from the usual May Bank Holiday weekend to align with the Queen’s Platinum Jubilee Bank Holiday Weekend, which begins on Thursday 2nd June. Slam Dunk Festival will be a blast with four incredible headliners and other massive acts to the best up-and-coming bands. Here are just some reasons why it is not to be missed!

The festival has four huge headliners!

These bands should need no introduction but to highlight their significance further. 2022 will mark Canadian post-hardcore act Alexisonfire’s first new album in 13 years, so you know they will treat fans to some new material. No other band quite sounds like them. Bringing an energetic and fun performance is a guarantee. Their new album ‘Otherness’ is out on the 24th June.

Also, hailing from Canada is one of the most well-known pop-punk acts Sum 41. They also are unleashing a new album this year titled ‘Heaven and Hell’, and what is more exciting is that it will be a double album, with one half of ‘Heaven And Hell’ inspired by the pop-punk of their early albums and the ‘Hell’ half of the new album will be some of their heaviest metal-inspired work yet. What a great time to catch the band revisiting the nostalgic feel-good days of pop-punk whilst also seeing them enter a new heavier chapter.

American Celtic punk rockers Dropkick Murphys were added to the line-up to replace previously confirmed headliners Rancid, who could no longer make the event. What a replacement they are, as they are known for their memorable and boisterous live shows, so you certainly don’t want to miss the rowdy and lively set that will surely be a highlight.

The final headliner, Neck Deep may not have been around as long as the rest of the heavyweight headliners or be as well-known. That makes their headliner spot all the more impressive and is a testament to their hard work and sound and marks their first time headlining a festival, so they will be bringing everything they have got to their set. Their latest album, 2020s ‘All Distortions Are Intentional’ was critically acclaimed and some of their best work. Fortunately for attending fans, they are teasing something special, hopefully in time for the festival.

Besides the headliners, there are plenty of well-established huge bands on the bill, such as The Used, who again will take festival-goers down a nostalgic journey with their signature blend of punk, emo, and hardcore sound. The last album was 2020’s ‘Heartwork’, which was well-received, and I’m sure their set will span their impressive back-catalogue covering two decades.

Beartooth is another band not to be missed, sporting a passionate, intense and energetic set with their anthemic hardcore punk songs, which were meant for the live setting and are perfect for the audiences to shout along. Their latest album, 2021’s ‘Below’ is bound to be at the forefront of their set, but no doubt they will pull out all of their top tracks.

Keeping with the hardcore, Cancer Bats are another band that knows how to put on a striking and commanding set with their intense and blistering music. They have recently released their seventh album titled ‘Psychic Jailbreak’, which marks their first as a trio after founding guitarist Scott Middleton left last year, so it will be interesting to witness them in this new stage.

Silverstein has been serving up their unique blend of music consisting of elements of post-hardcore, emo and hardcore punk for over two decades now. They are still going strong with their new album titled ‘Misery Made Me’ coming out on the 6th May via UNFD which may be their best material to date as it blends all their best elements perfectly. They are bound to play a lot of the new material at the festival.

Some newcomers to look out for include Meet Me At The Altar with their uplifting nostalgic pop-punk, which is super catchy and fun and to make it more special, this will be their first-ever UK festival appearance. They will impressively support Greenday and Weezer on some shows in June, so things are looking exciting and busy for the band.

Australian pop punk act Yours Truly are another up and coming band to watch out for with their catchy tracks that are reminiscent of old Paramore vibes. With their 2020 debut album ‘Self Care’ under their belts, they are already making waves, so the future looks promising for the alt-rockers.

For more information and to get tickets visit: https://www.slamdunkfestival.com/