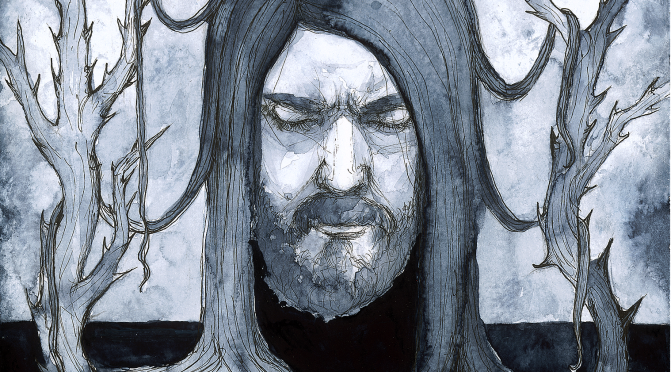 Ana Argan List was formed early 2020 as a solo project by Edvin Johansson before known as a founder of the black metal band Orngòth. Edvin has now departed the band to fully focus his attentions on his new solo venture. The upcoming self-titled four-track EP is due for release November 1st via Ground Media Group. We caught up with Edvin to find out all about his new project ahead of the debut EP release…

So, before we go into music, what you have been doing during the lockdown/covid crisis or was that one of reasons started Ana Argan List in the first place?

During the pandemic I’ve been working my regular 9:5 job. Since I live in Sweden we don’t have any change in society during the pandemic other than guidelines issued by the government.
I wrote music that didn’t really fit into Orngòth so I started Ana Argan List. And since it’s very personal I wanted it to be just me playing, recording and mixing everything myself.

How did you come up with the project name and what does it mean?

Ana Argan List is a Swedish proverb that means “Suspect that something unpleasant will happen” I have always struggled with anxiety so I thought the old proverb is a pretty good metaphor for what I’m feeling.

What was your main inspiration for this project?

My main inspiration is nature and emotions. This project is a reflection of my own feelings. Nature calms me and my anxiety fuels the music. I’m trying to find the same balance between softness and harshness in my music as I find in nature.

Can you tell us a bit about the writing and recording process for the EP?

Typically I start riffing on my guitar and when I find a riff that I like , I record it via Focusrite soundcard into a DAW called REAPER. Then i expand the song from the main riff (usually) and add vocals/synths etc. Drums are written in MIDI.

What are the main lyrical themes explored if any on the EP?

The main lyrical themes are emotions I try to overcome or express.
The intro is called Algiz which is a protection rune, setting the theme. The last song on the EP is called “Siarens Misstag” that song is instrumental because I didn’t feel like I needed to add any lyrics since it’s filled with raw emotion.


Have you already begun work on new material for a full-length release or is it too early to say?

Yes! I’ve written 5 songs thus far! I really think it’s something special and I dare to say it’s even better than the EP.

Are there any plans to do a live stream show to mark the release?

That’s going to be hard since It’s only me playing the instruments. I’ve only got 2 arms unfortunately. If you don’t want to hear me beatbox… But I don’t think that will reflect the EP in the best way…

When the world returns to some normality and touring is back on the cards, are there any plans to tour with your new project?

Yeah I would love to tour. If the opportunity is given and I’ve got a band together.

You are the founder of black metal band Orngòth, are there any updates on the band, have you been working on anything or mainly focusing on solo project?

I’m sorry to say that I’ve stepped away from Orngòth since I wanted to focus on AAL(Ana Argan List) . I can’t speak for them anymore, but I think they will continue with the band.

Two of my friends and I have a project called Filth Eater.
We have been recording our first EP but haven’t released anything yet. If you like melodic black and death metal then keep an eye out on social media!

What else are you currently working on?

Stay healthy both physically and mentally and keep listening to good music! Cheers!

Listen to the EP below: