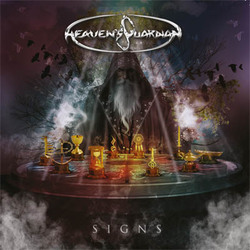 Melodic Power Metal from Brazil is presented by the septet HEAVEN’S GUARDIAN, already active since 1997.

Through Pure Steel Promotion we distribute the actual, already third album „Signs“, which has some bombastic tunes on it. Rough male vocals of Flávio Mendez unite with the melodic and dramatic female voice of Olivia Bayer, heavy guitar riffs meet up with keyboards and powerful doublebass drumming.

Recommended for all fans of bands such as Angra, the (Opera) Metal master Nightwish and also bands like Brainstorm and Mystic Prophecy.

Upcoming metal quintet Bleed Again from Worthing, UK have just announced they have signed a worldwide deal with Sliptrick Records. They have already built a solid reputation locally and are now set to dominate further afield. Along with this announcement they have unleashed a mental new video which was filmed at this Mammothfest 2016 UK in Brighton for ‘Through My Eyes’ as well as announcing their anticipated debut album ‘Momentum’ which is set for release on May 1st, 2017 via Sliptrick Records. This is their year to strike, as they proving they are a force to be reckoned with.

Known for their dynamic performances, they have already shared the stage with established bands Soil, Darkest Hour and Devil Sold His Soul as well as landing various festival slots with Mammothfest.

Check out the exciting and energetic new video for first single, ‘Through My Eyes’ taken from their upcoming album, ‘Momentum’: