After announcement MERCYFUL FATE, here is update of another new bands playing in BA for this year.

Again, we shall see relatively new band to the genre, which draw power from the thrash metal roots. With strong message MUNICIPAL WASTE shall raise some pogo and hell. Another thrash act is M.O.D of Billy Milan.

For some “relaxation” RED FANG will give us some music dose of their addiitive stoner stuff.

DARKEST HOUR will be another representation of the modern metal. Staying in the moderna will be the place of FLESHGOD APOCALYPSE and their extensive content of death metal grinding stuff mixed with nice symphonic compositions. Another death metal will be presented by gory classic EXHUMED, punk stinking NECROT or cold and raw SOREPTION.

Similar to MERCYFUL FATE, PENTAGRAM with troublemaker Bobby Liebling will be one of the oldest existing bands of the festival… Their existence reaches to 1971 and they are one of the first bands which were derivates of BLACK SABBATH. Another band in VENOM, BATHORY or CELTIC FROST style is black metal of DENIAL OF GOD. Some more melodical approach will be given to us from Swedish VALKYRJA.

The third band update confirms the the combination of elite deathgrind with spectacular voice work of Californian CATTLE DECAPITATION and their presentation with the new Death Atlas album. Not that extreme modern shall please the fans with a melodical, symphonic deathcore of SHADOW OF INTENT. Thrashers adding some death metal in their art are FUELED BY FIRE and the next year they also will release a new album we can expect to see songs from at Brutal Assault.

There will be also KATATONIA from Sweden with their slower melancholic riffs in a progressive way. Some spicing of the festival will be in the form of FEVER 333 and their combination of rock, hip-hop, punk, post HC, D‘n‘B. Other experimental band is PSYKUP with their mix of progressive death, jazz, punk, hardcore.

The blacker side is represented by one and only MYSTICUM. Other new black metal project is IMPERIAL TRIUMPHANT with their dissonant jazzy side of black metal music.

Here is the second update for new bands confirmed. From Ukraine, 1914 will bring us their war poetry in their specific black metal way. In the same genre, but again, with own obscurity or weirdness, SIGH of Japan shall see the stages of Josefov‘s areal. From European south, Italians OTTONE PESANTE trio will continue in avandgarde while the strong drums are in company of a thrumpet a trombone.

Modern fans who prefer some trendier stuff shall enjoy metal core of WHILE SHE SLEEPS or RING OF SATURN, STATIC-X. Harder technical stuff will be given to us by great BEYOND CREATION.

Old school fans can expect bands like VADER, NECROPHOBIC. There will be also other matador from Britain. CRADLE OF FILTH, this time with their presentation of Cruelty and the Beast which belong to their top albums and it is fine classic of genre overall.

Before bands update, firstly some information for the next 25th anniversary. In near days, there will be new options added to our e-shop regarding the festival services like tribunes, camps, parking, hotels. Now some stuff about the bands.

MYRKUR has canceled the show this year due her late stage pregnancy, but the next year we will withness her for the third time. Hopefully with no issues as the last time when the show was stopped by fire fighters intervention. From black metal waters, can expect faster show of DARK FUNERAL or the other classic, VENOM.

Thrash metal followers will be happy for ANSELMO & THE ILLEGALS performing Vulgar display of PANTERA. Other band mostly dwelling in undergroud, while perfroming next to Slayer for example, is Canadian RAZOR.

For some death metal fan‘s satisfaction ASPHYX or interesting NOCTURNUS AD with their keyboard implementation and interesting spacy feeling shall be playing. Even more extreme, WORMROT is going to slay us with their grindcore. With a little additive of death metal, funeral doom EVOKEN will perform. 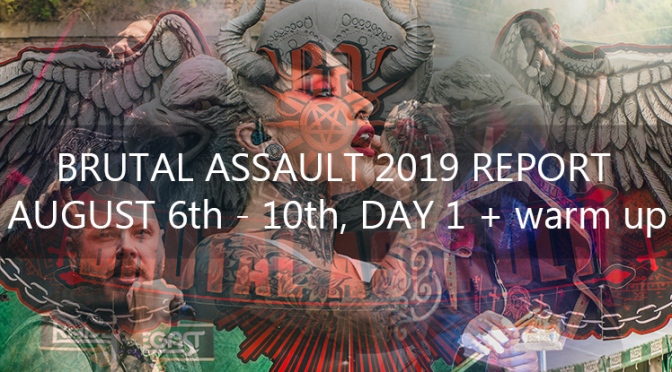 Once again the gates of Brutal Assault Festival located at the Josefov Fortress of Jaroměř and within the heart of Europe, Czech Republic, has opened.  The festival took date from August 6th to 10th with the line up of 130 bands.  The place and time is kind of sacred to me.  Usually, I would be looking forward to about two or three bands.  But during the festival I discovered another ten more favourites that I enjoyed and additionally more that I started to like. This is not even mentioning some other stuff that was happening.  One starts to think about cosmos games.