Symphonic metal act from Russia Imperial Age formed in 2012 by singers/keyboardists Alexander ‘Aor’ Osipov and Jane Odintsova, soon after forming, they landed some great support slots for international bands such as Epica, Paradise Lost, The 69 Eyes, Tarja, Therion and more.

In 2014 while opening for Therion, founder/composer and guitarist, Christofer Johnsson of Therion approached the band and offered to distribute their CDs via his label Adulruna Records and after they joined them on a big European tour which was the start of big things for the band.

Then in 2016 they released the EP Warrior Race. That same year the band had started working on a new album and in 2017 it was revealed to be a metal opera under the name ‘The Legacy of Atlantis’. As they wanted a metal opera they needed multiple singers so Aor and Jane put aside their keyboards to become full-time vocalists. The album was recorded with Therion musicians: Nalle Pahlsson (bass, guitar, acoustic guitar), Thomas Vikstrom (vocals) and Christian Vidal (solo guitar), while Sergey from Arkona provided additional guitar, as well as doing the mixing and mastering of the record. Taras Yasenkov conducted the Moscow Conservatory Chamber Choir to record the biggest and most challenging tracks in the band’s history so far. After recording the album they found the rest of their members to begin touring, with  Anna “Kiara” Moiseeva, Belf, Vredes and Max Tallion joining Aor and Jane.

With the latest big release and their headline UK tour coming up in April we caught up with Jane and Aor to discuss the tour, the past, the album and of course the future…

Can you tell us how Imperial Age came to be back in 2012?

Jane: Aor’s first band was called Revelance. It was formed right after we finished school (we know each other from high school) and it was a regular amateur band, with regular rehearsals (like twice a week or something), where members were mostly hanging out with each other, smoking and drinking beer instead of improving their musical skills. I wasn’t in the band, but I was regularly hanging out with them during their ‘rehearsals’. It ended up in a standard way – they all broke up because everyone thought that he/she does more than the others and there was too much money needed for the promotion. A few years were taken as a time out and we came up with the idea to make a project ‘professionally’, and this ‘professionality’ started with hiring session musicians (no more friends in the band, though of course people who you work with for many years are becoming your good friends anyway. Here I mean that the relationship with the musicians started as professional and not as ‘hey, buddy, come play with me in a rock band, huh?). Some songs were taken from Revelance, some were new. We dressed everyone in costumes, filmed two music videos and were ready to start conquering the world.

How did you arrive at the band name?

Jane: The music was first to come. We already had all the music when we started to think about the name. It took us a year, maybe even a year and a half. There were (and there still is) something big, something great, pompous in the music. So we decided that there should be the word ‘imperial’ in the name. And since we’re singing about ancient prehistoric civilizations we added ‘age’ to the name and we got ‘imperial age’ which means – times when the great ancient civilizations (empires) existed.

There aren’t many well-known Russian metal bands but in April this year you are heading out on your UK headline tour, how does that make you feel?

Aor: It’s our second headliner tour – the first was a year ago, and it covered not just the UK but all of Europe. We are very proud, but that is only the beginning – wait for further announcements.

Speaking of your headline UK tour in April, how excited are you for this and what can attending fans expect from your shows?

Aor: As this is our second headliner tour in the UK, which means bigger venues, bigger production and new songs!

To determine your support act you are offering emerging UK acts the chance to open for you which is really cool, how did this idea come about and what has the response been like following this?

Aor: The idea (as all my ideas) came spontaneously – I shared it with our fans and they supported it, so we made it happen. The response turned out to be bigger than we expected – some bands are trying to rig the vote by flooding our Facebook Group with bots and bought votes, so have to monitor the situation and seriously monitor the whole thing to minimize fraud. Didn’t expect it!!

Jane: For international artists, it is getting smaller with every year. Most of them play only Moscow and St. Petersburg. We have never been interested in getting big at home because there are much more metalheads outside Russia than within the country.

How happy have you been with the response to your latest album The Legacy Of Atlantis and how did you arrive at the title for this?

Aor: The title refers to the idea that there was a very advanced civilization before us and that what we call magic is actually the surviving remains of their science. There is significant evidence in support of this theory in the form of multiple inexplicable megalithic buildings all around the planet and other less known but even more contradictory facts.

Concerning the response – very happy. 90% of reviews are very positive, and the other 10% are just positive.

Can you tell us about the writing and recording process for the album?

Aor: The album was written in 2016-2017 and recorded under very stressful conditions in the autumn of 2017 – we had to finish it before our big EU tour started. We are very grateful to Therion and Arkona musicians for recording the instrumental part.

Your latest music video for single ‘The Legacy Of Atlantis’ has received a lot of views and was impressively crowdfunded by fans, how happy are you with how it turned out and can you tell us about the making of it?

Jane: We were expecting it to do well, but still, we were very surprised and pleased to get such a good response! Fans are the only real value a band has. And we have the best fans in the world – they support us in every our endeavour!

The date of filming was moved 2 times because of different reasons, but we did it:)

The director is our good friend (the second drummer of Revelance, by the way). He has a good crew, so the filming itself was smooth and brought only fun (I think beer and wine have something to do with it).

Check out the music video for ‘The Legacy Of Atlantis’ below:

What songs do you enjoy playing live the most from that album and why?

Aor: Legacy of Atlantis, Life Eternal, And I Shall Find My Home, Awakening – they are just my favourites.

What else do you have planned for the rest of 2020?

Aor: We have HUGE plans, and once everything is confirmed, we will announce it – coming really soon, but can’t tell you right now ) The only thing we can say is that there will be a new album by the end of the year.

Is there anything else you would like to add?

Jane: Stay tuned, metalheads – we have plans for you! 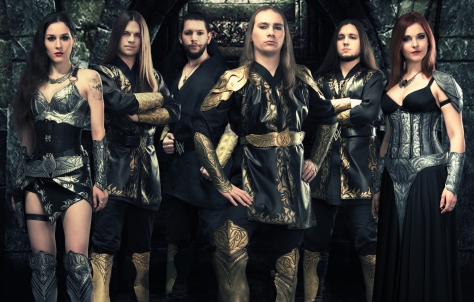 For more on Imperial Age: