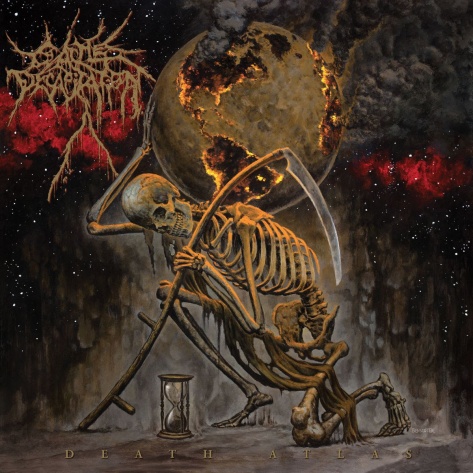 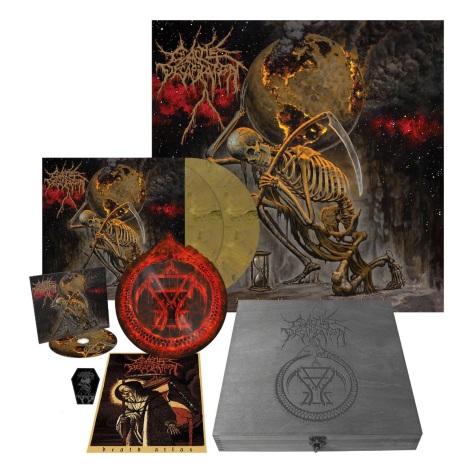 Cattle Decapitation have never shied away from confronting the awfulness wrought upon the natural world by the human race, and Death Atlas is their bleakest offering to date. The cover art says it all: a stooped, skeletal Grim Reaper carrying the burnt-out husk of our planet on his back. “The core concept of this record is humanity’s insignificance despite what we’ve convinced ourselves,” explains vocalist Travis Ryan. “That’s kind of why this album cover takes place in space, to remind you that ‘the universe always finds a way to purge’. In the grand scheme of things, our species is merely a fleeting thought.” This imagery is backed up with a ferocious soundtrack, which includes elements of death metal, grindcore, black metal, sludge, doom, drone – with Ryan’s vocals broader and more fully realized than ever before.

Produced once again by Dave Otero (http://www.flatlineaudio.com), Death Atlas also features a number of guests: Laure Le Prunenec (Igorrr, Ricinn), Riccardo Conforti (Void of Silence), Dis Pater (Midnight Odyssey), Jon Fishman (Phish) – plus, brass instrumentalists from Ottone Pesante. The end result of these experimentations and collaborations is one of the most devastating records of 2019, and it demands an emotional response.

As the band prepares to tour and hopefully reach places they have yet play, what Ryan wants listeners to take away from Death Atlas is clear: “I want people to be shocked into thinking more about their futures, their loved ones, the pain they’re potentially subjecting their future generations to. Everyone just seems to live in the now with no care for tomorrow, and that’s incorrect thinking, as far as today goes. Don’t make tomorrow a cancelled check.”

Death Atlas track-listing
1. Anthropogenic: End Transmission
2. The Geocide
3. Be Still Our Bleeding Hearts
4. Vulturous
5. The Great Dying
6. One Day Closer to the End of the World
7. Bring Back the Plague
8. Absolute Destitute
9. The Great Dying II
10. Finish Them
11. With All Disrespect
12. Time’s Cruel Curtain
13. The Unerasable Past
14. Death Atlas

Cattle Decapitation will tour Europe right before the release of Death Atlas in October and November!