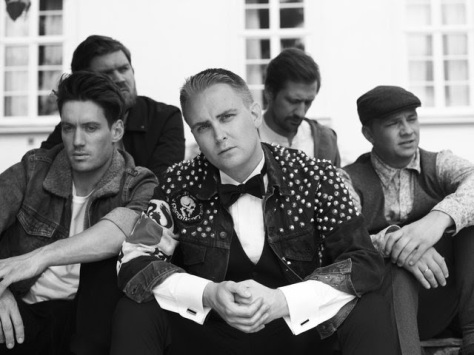 Norwegian folk-rockers have created headlines in national newspapers in Norway during a national controversy of whether or not to celebrate the 500 years of passing since the Reformation.
​
Glittertind started out as a folk-metal act with a record deal and two albums on Karmageddon Media (ex- Hammerheart records) and later one album on the Austrian metal label Napalm Records. In recent years the band has created records that are better labeled as folk-rock with a diverse range of elements from classical music to metal.

Their new album Himmelfall (‘Heaven Fall’) was released October 27th in Norway and commemorates the 500 years that has passed since the Reformation, and Protestantism was forced upon their homeland. The band created headlines in national newspapers during controversy over whether or not to celebrate that 500 years ago Martin Luther started his rebellion against the Church in Rome.

“In Norway, the general public has been more interested in Halloween than commemorating the events 500 years ago that shaped Europe and America. The Reformation is far too important to “be pushed by the secular society into the Church” frontman and vocalist Torbjørn Sandvik told the Norwegian newspaper Dagsavisen (‘The Daily Times’). He also told the paper that he himself was not a Christian, but he argued that the impact of the Reformation on our culture is so huge that it should not be ignored regardless of faith.

To the national Norwegian newspaper Vårt land (‘Our Land’) Sandvik stated in an interview: “If we forget our history and where we come from, we will end up superficial and rootless”.

Norway’s biggest metal magazine Scream Magazine has given the new record 6/6 points in their November issue and the reviewer Nash Rothanburg wrote: “Glittertind has maybe created their best album since “Landkjenning! (2009)”

“Himmelfall” is out now and was released on November 17th through Plastic Head in the rest of Europe and so far Soundscape Magazine (UK) has given the album 9,5/10 and Metal Temple (US) has given it 8/10 points.
English comments on the songs and several lyric videos are available here:
http://glittertind.net/himmelfall_lyrics.html
‘Himmelfall’ is out now and can be ordered here:
http://www.plastichead.com