Brighton’s annual dedicated metal festival Mammothfest makes a bigger impact each year and this year’s event was no exception, especially as they impressively managed to bag 3 UK exclusive headliners with Rotting Christ, Fleshgod Apocalypse and Amenra.

Since its return in 2014 Mammothfest has always mustered up a formidable line-up, comprised of heavyweight acts such as Textures, Venom Inc, Sylosis, Entombed, Martyr Defiled and more in the past, as well as always showcasing the best and upcoming talent, they even have a whole stage devoted to this, named the Rikstock stage, after Mammothfest director Steve Dickson lost his close friend and business partner, Rik Mosquero to brain cancer, he went on to name the stage in his honour and highlight the emerging artists, Rik himself was in local band Hole In The Sky who have frequently played the festival, including this year’s event. Along with the bigger calibre acts they bring in each year, the festival has successfully managed to upscale its venue as its new current home is The Arch located on the seafront and is a perfect central spot in Brighton, whereas previously the festival has hosted at different and smaller venues across a weekend, highlighting again the growth and expansion of this massive metal event.

END_OF_DOCUMENT_TOKEN_TO_BE_REPLACED 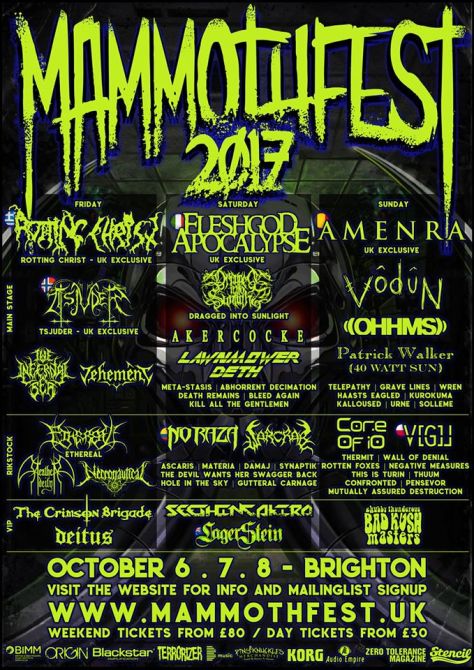 With Mammothfest less than 3 weeks away now, we take a look at just a few of many reasons why you should be checking out this annual Brighton UK based festival, which keeps growing every year. This year it takes place from the 6-8th October at The Arch, Brighton located along the seafront, making it a great venue to host this mental extreme metal weekend. 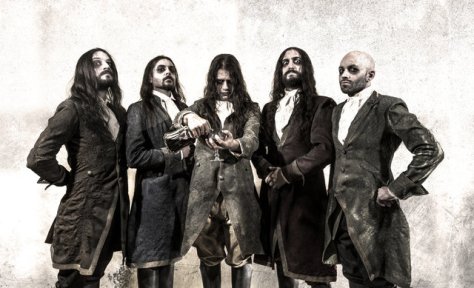 The festival has impressively managed to secure all three headliners as UK exclusives which is very exciting, especially when the headliners consist of controversial Greek extreme band Rotting Christ (Friday), Italian Avant-garde Fleshgod Apocalypse (Saturday) and Belgian metallers Amenra (Sunday). They can all only be witnessed at Mammothfest in 2017, so that is one hell of a reason to come along!

END_OF_DOCUMENT_TOKEN_TO_BE_REPLACED 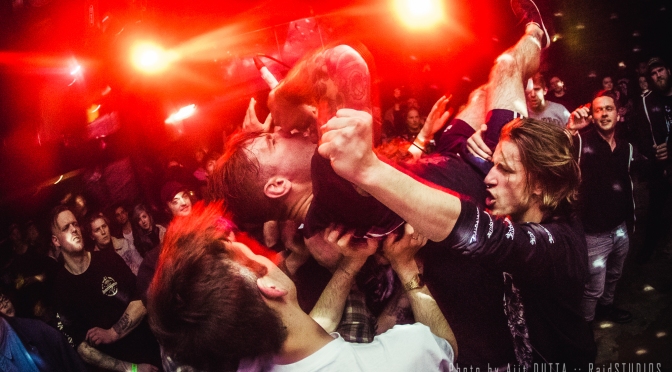 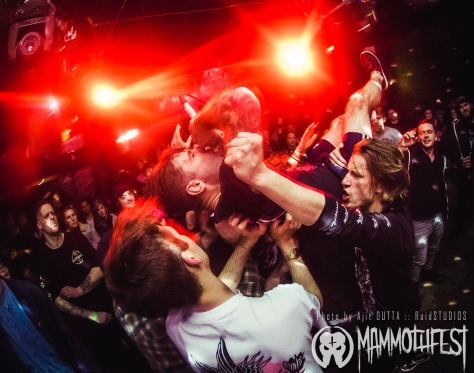 Headliners Brutality Will Prevail Cause Carnage!

This marked the third ‘Mammothfest Presents’ show of the year (following hosting headliner shows with Feed The Rhino and Vader), and this time it was a seriously hardcore and metalcore affair, offering more diversity. These shows are aimed at different rock/metal genres and continue to highlight the importance of supporting local acts, especially with this third instalment, as this event was to celebrate the launch of upcoming Worthing metallers Bleed Again debut album ‘Momentum’, and what a way to launch your album, amongst heavyweights such as heavy metal veterans Raging Speedhorn and modern hardcore heroes Brutality Will Prevail who headlined the event. 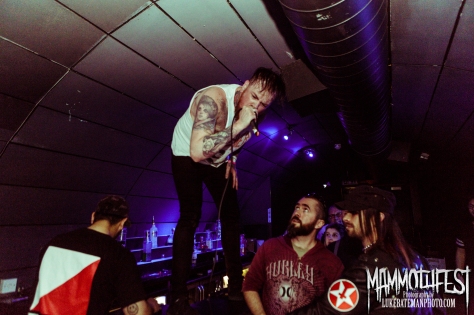 So I unfortunately missed the opening act, Operation Kino on the main stage, so I headed to the Rikstock stage (second stage) to see what was happening there and saw my first band of the day Confronted a crossover hardcore thrash band from the South Coast, UK. I’m very glad I witnessed this – for an opening act to put on an unforgettable and mental set like they did was unforeseen. Vocalist Ryan Hull quite simply was unhinged, with his confrontational and unpredictable stage antics. He literally pushed and shoved the crowd, and got right in your face, and managed to get around in places that he shouldn’t, such as behind the bar and standing on the counter, as well as just randomly and aggressively descending to the floor and laying in awkward places. You can see why they are called Confronted, luckily this went down well with the crowd for the most part, who were enthralled yet perhaps on edge understandably. He also kept getting a floor tom drum out sporadically and dragging and throwing it around whilst amongst the crowd. By the end, he had enough of the drum and smashed through it and wore it on his head, adding to the comical factor of their set. Humour aside, they have a brilliant aggressive sound and went out on a high, closing their energetic, brutal and awe-inspiring set with an impressive cover of Soulfly’s ‘Seek ‘N’ Strike’. 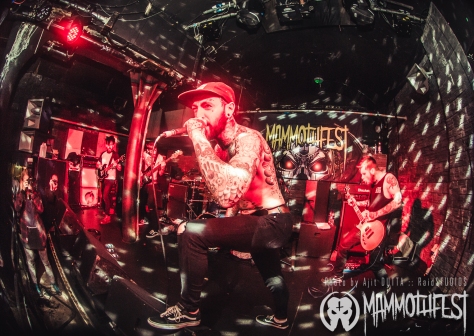 After a 3-year break, Worthing act Bleak Falls are back on the live scene, luckily for Brighton, as their melodic emotive hardcore went down well with the crowds, especially aided by front-man Rudi’s passionate, emotive and deep performance. They had great energy and as you would expect after their break, they came back fighting with new song ‘Love Hate Love’ which is the title track taken from their upcoming full-length album, which hopefully will be out soon, but the exact date isn’t yet confirmed.

Five piece metalcore band Everest also from the South of the UK, managed to get the first real mosh pit of the day when commanded. They were very safety conscious giving everyone a heads up so you knew when to expect things to get more savage. Bassist Owen helped engage and get the crowd going more-so by coming into the crowd a few times to rock out with the fans. This was a strong set with their hard hitting sounds receiving some good applause and appreciation from the crowd.

Seek nothing from Germany although they deliver hardcore music, injected some light heartiness into their set through vocalist Mike, with his great sense of humour, including shaming his sister in the crowd for being on the phone, having a dig at themselves for ruining people’s day after all the good bands, and also starting a new saying and getting people shouting “trifle of mosh” which could catch on. Jokes aside they have a great serious sound and ex-bassist Anthony Giles from Brighton made a few guest vocal appearances throughout the set, which made for some good collaborations and dynamics, throwing the mic into the crowd and screaming back at each other.

Death remains have built quite a reputation for their energetic and relentless shows and they lived up to this, with their great melodic sound and dominating stage presence. They recently unleashed their sophomore album ‘Destroy/Rebuild’ and treated us to some new tracks, including closing with the brilliant ‘Rebuild’ which is also the final track on their album. This show marked the end of their tour with tour mates and band of the day Bleed Again, and what a way to finish up. 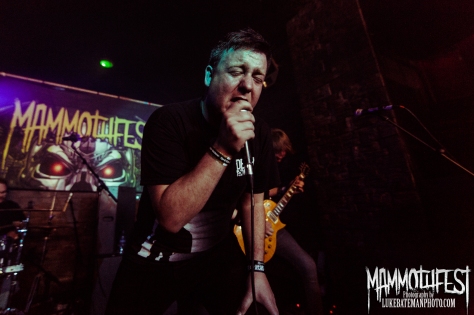 The band of the day Worthing metallers Bleed again certainly stood out with a stunning set as they should for their album launch show for the masterful debut album ‘Momentum’. They played all their finest and crowd-pleasing songs, which resulted in many a mental mosh pit, lots of bouncing and plenty of head banging for the entirety of their set. They fittingly opened with the blistering ‘Decimate’ the opening track on the album and went on to play the dominating anthemic likes of ‘Slavery’ and the perfect singalong ‘Icarus’ which had the crowd going wild. Latest single ‘Walk Through The Fire’ made a massive impact with the whole room appreciating their well-crafted melodic metal. They ended their soaring set with ‘Through My Eyes’ which gave the pit one more heavy workout. It is clear why they have earnt a respectful and well-known reputation for their energetic live shows, and have built a very loyal local fanbase as a result. With a brilliant debut now under their belt, Bleed Again are ones to watch and will no doubt be earning a lot more fans. For their hard work and efforts the man behind Mammothfest, Steve Dickson kindly presented them with a bottle of bubbly to celebrate their debut release and achievements.

British hardcore punk act Giants from Essex, UK were high on the bill with their great sound, which embraces melodic hardcore and the essence of punk. Unfortunately there was a low turnout for their set for some reason, but nonetheless, everyone who was there enjoyed themselves and enthusiastically danced and head-banged along to their catchy tunes from them 2016 debut album ‘Break The Cycle’. 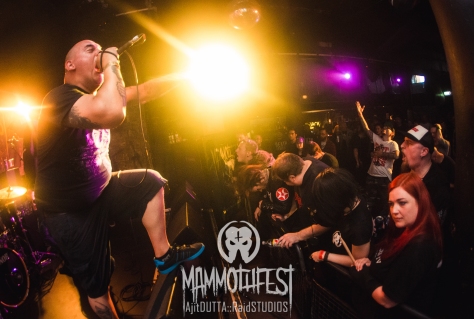 Second headliners Raging Speedhorn from Northamptonshire UK have been around since 1998 on and off and quickly established themselves in the UK metal scene. This was a special show as it was vocalist Frank Regan’s first show back with the band, joining other vocalist John Loughlin to deliver a dynamic and crushing unstoppable blow. The energy, intensity and craftsmanship were immense throughout their entire set. The crowds were constantly moving and some extreme circle pits opened up, with fans running around madly pushing each other in what was a very packed room. Their years of experience shined through, as their performance was tight, commanding and they possessed great stage presence and interaction. They have recently released their fifth album ‘Lost Ritual’ and played the instant fan favourite ‘Motorhead’. They also as you would expect played well known and popular classic songs such as ‘Thumper’ and the hard-hitting ‘The Hate Song’ which made for ridiculous crowd reactions. This was a punishing and highly enjoyable set, and was definitely one of the best sets of the day which you would expect from these heavy metal veterans. 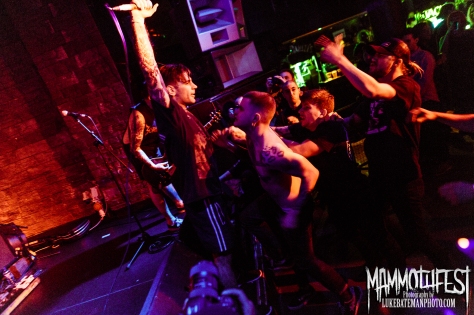 It was clear to see that Welsh hardcore outfit Brutality Will Prevail were headlining, and who better for a day of predominately hardcore music to close the day. The level of crowd participation and mental antics went to a whole new level. There were safety barriers in place between the band and the fans, which was immediately broken as the fans were ravenous and grabbing front-man Louis Gauthier and sharing the mic with him, showing their devotion by passionately screaming the lyrics. From start to finish it was constant spinning kicks, circle pits and stage invasion, with fans wildly getting on stage and jumping off. Later in the set, they triumphantly carried Louis high above their heads to show their appreciation of their set and by the end, it was all too much, the crowd just couldn’t contain themselves as they fully engulfed the stage. The band themselves had heaps of energy impressively jumping at any given opportunity and with no depletion of their stamina in sight. They played some new songs from their latest killer album ‘In Dark Places’ such as the dark anthemic ‘Forever Restless’ and ‘Penitence’, as well playing some well-known tracks from them back catalogue, including their most popular song ‘The Path’. Their set was relentless and utterly exhausting, but brilliant and demonstrated why they were the front runners of this ferocious event.

This was a resounding success amongst the fans and bands alike, with everyone thoroughly enjoying themselves and letting loose, whether that was moshing, doing spinning kicks, jumping or taking over the stage, this was very brutal and was the mere definition of hardcore. Mammothfest now has three successful diverse all day gigs under their belts, all of which are contributing and building momentum and hype for the main festival, which takes place at The Arch venue yet again on October 6-8th. The metal scene is clearly strong in Brighton and these shows are a testimony to that. The shows highlight the ethos behind Mammothfest, bringing emerging and big acts together, offering something for all and showcasing the best local acts going. So spread the word of what savagery and enjoyment took place here and see you at the main Mammothfest event. 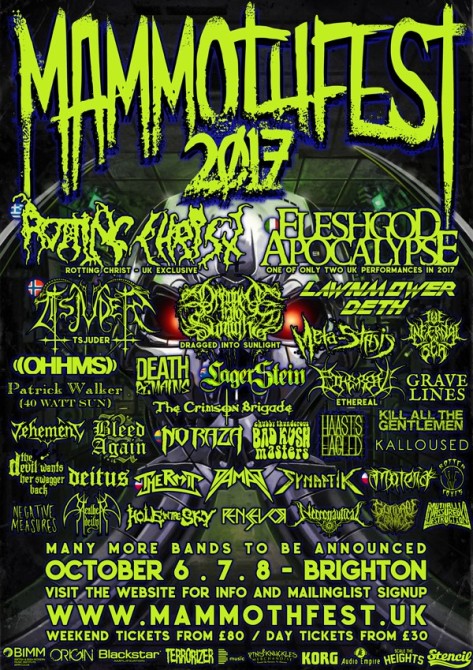