German modern metallers FALL OF CARTHAGE have released a new video for the track “Suffer The Pain”.

Taken off the band’s latest album “The Longed-For Reckoning”, “Suffer The Pain” is not your typical performance video, but a complex and cinematic staged clip, directed and produced by Michael Ciesla (SuidAkrA).

The shooting took place in the middle of February in Kleinrinderfeld, near Würzburg.

https://www.youtube.com/watch?v=sqoIbV9QcKY
Fall Of Carthage will be supporting Hopelezz this summer on a mini tour. Check the live dates below

UK’s Grindcore pioneers NAPALM DEATH have announced the complete line-up for their next headlining tour across European in April/May. Much suitably dubbed “Campaign For Musical Destruction”, the package also features Brujeria, Power Trip and newly added Lock Up. Do not miss one of the most extreme musical billings for this year…

Here is a list of all upcoming dates for NAPALM DEATH, including some newly announced festival appearances (New additions marked ***):

And copies of the recently released “The Mission Creep” Split 7” EP with Germany’s HEAVEN SHALL BURN are available from CM Distro here: http://smarturl.it/splitCMDISTRO

It’s been three years since Kobra And The Lotus‘ last studio album High Priestess was released back in 2014. The time since has not been wasted; with their third album under their belt, and completing multiple tours worldwide (with the likes of Kamelot, Sonata Arctica, Black Label Society, and Fear Factory to name just a few), their path of self-discovery has led them to this most important moment in their career. Prevail I, the band’s latest offering , will be released on May 12th 2017 on Napalm Records, and promises to be a rock juggernaut full of blistering guitars, pounding rhythms and haunting vocal melodies that will take the listener on a sonic journey leading them out from the darkness and into the light! Produced by Jacob Hansen (Volbeat, Amaranthe, Epica etc) and mastered by Grammy award winning Ted Jensen, Prevail Iwill undoubtedly usher the band to much deserved elevated hard rock status. Evolution is inevitable and Kobra And The Lotus have delivered their most powerful album to date.

Says vocalist Kobra Paige:
“To be alive brings many great things but among those things includes great suffering. It’s painful to feel backed into a corner, judged, misunderstood for who we really are. We can never really know a person until we have seen their point of view, crawled into their skin, and walked a mile in their shoes, but that will never happen. This is the anthem for the man, the woman, the human, navigating their life the best way they can. After all “You don’t know what it’s like to be me!”

Prevail I, with Prevail II to complete the story in the not too distant future, by Kobra And The Lotus, will be released May 12th 2017 on Napalm Records.

Kobra Paige and the band are excited to hit the road:
“It is with great pleasure to announce not only our first tour of the year but also our first unveiling of Prevail I!! We are thrilled to be hitting the road through North America this May in support of Xandria. With Once Human kicking off the night, this is sure to be a fiercely versatile bill that will keep people on their toes from start to finish. See you soon!!”

This is not just an ordinary music video premiere! Ukraine based JINJER have decided to release the track “Pisces” off of their latest effort “King Of Everything” (2016, Napalm Records) in support of their upcoming tour as special live session video!

Band comments about the concept behind filming a new music video:
“I believe we had this idea to record a new version of “Pisces” when we first rehearsed the song with Vlad Ulasevich as a new drummer. His drumming makes the song sound really different. So we finally had some free time last winter, we went to Istok studio in Kiev, did a live recording and shooting, then added over some extra lines, like a few backing vocals and guitars, then Max from Morton Studio made this new magnificent version of mixing and here we are – Pisces video. I hope you will enjoy it!”

Their latest lyric video for the track “Captain Clock” has also been released just a little time ago.
Enjoy the stunning Groove Metal clip HERE.

“King Of Everything” is out now via Napalm Records! Get your copy HERE.

Check out the latest  tour trailer HERE and make sure to show some love on the road and meet JINJER on this heavy headlining tour run. All dates can be found listed below. Don’t! Miss! Out!

HIEROPHANT will be kicking off their UK tour with a warm-up gig in the Netherlands tonight. The deadly Italian misanthropes will be supported by ABSOLVE and ROTT ‘N DAMNED at the Bibelot Poppodium in Dordrecht.

This showcase will immediately be followed by an assault on England. London will be hit first at The Lounge 666, tomorrow 17th of March. And after wrecking Leeds, Bristol, and Hull the final curtain will drop at The Westcoast Bar in Canterbury on March 21st.

HIEROPHANT commented: “We are very stoked to hit the road again. We can be nothing but grateful for all the support we got lately. Mark your date in the calendar and see you in the grave!”

HIEROPHANT commented: “Our new album, ‘Mass Grave’ is the result of two years spent collecting disgust and constant disappointment towards humanity and transforming this feeling into music. We are more than proud of that. Check this full record stream now.”
The artwork of ‘Mass Grave’ has been created by the renowned Italian painter Paolo Girardi (INQUISITION, THE LION’S DAUGHTER) and can be viewed together with the track-list below. 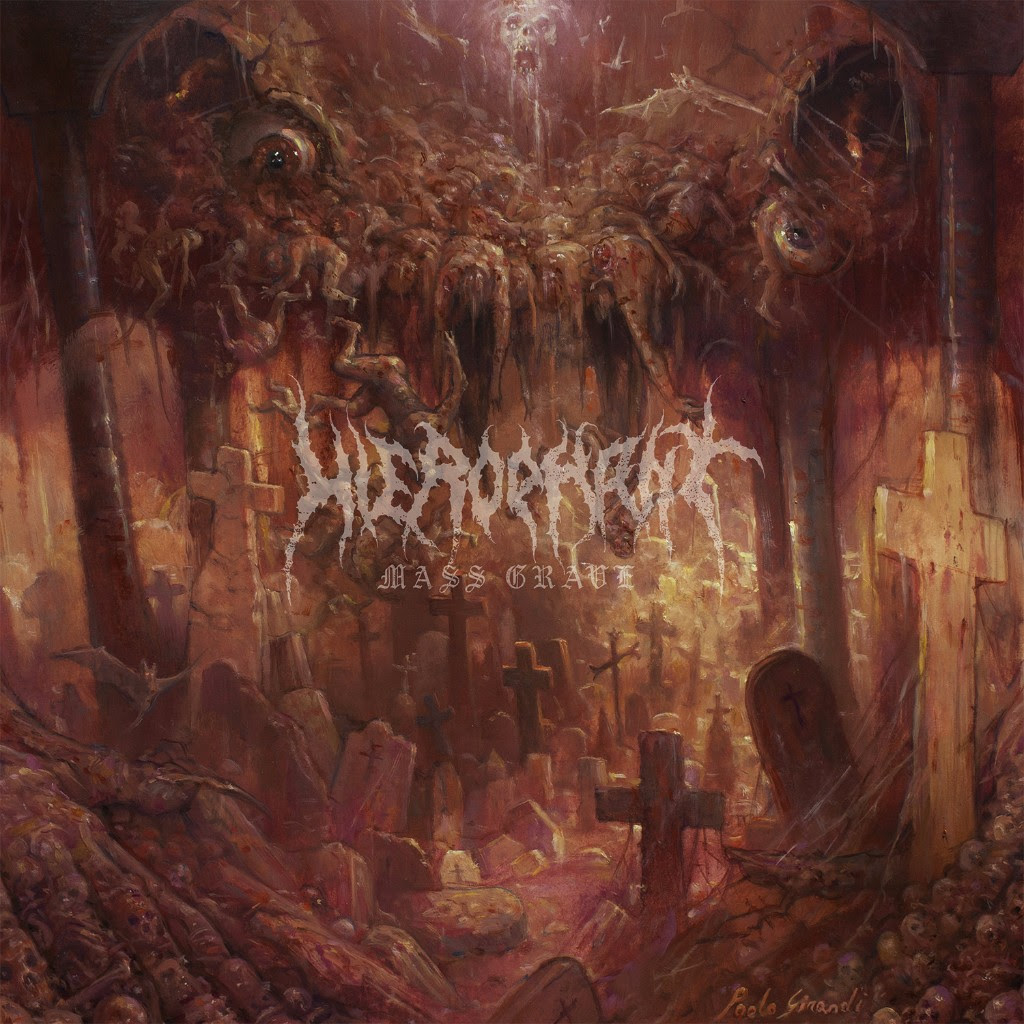 Canada’s ANNIHILATOR is the lifework of guitarist Jeff Waters. Founded in 1984, the band took the metal scene by storm with their debut 1989 release “Alice In Hell”, upped the ante with 1990’s “Never, Neverland” and has continued a non-stop career-pattern of releasing records and touring with many of the biggest bands in the metal genre (mostly all outside North America), ever since; cementing ANNIHILATOR as the biggest-selling metal act in Canada’s history.

After 18 months of touring for the band’s latest album “Suicide Society” (nominated for a 2017 Juno Award in the Metal / Hard Rock Album of The Year category), the band is currently finishing up their 16th studio release and is getting ready to headline not only the mighty WACKEN OPEN AIR Festival in Germany (Aug 3), but hit the road for their first Canadian tour since 1993.

The tour will see the band kick off their first date in Victoria, BC on June 13th and travel east wrapping up the tour in Cornwall, ON July 1st during Canada day weekend festivities. This is very big news for Canadian metal fans, both young and “older” whom have been waiting for an ANNIHILATOR tour to return to Canadian soil for over 20 years!

Support on this tour comes from Australia’s MASON whom was ANNIHILATOR’s support in Europe last year & from Montreal, QC thrashers MUTANK who won the acclaimed Wacken Metal Battle Canada contest in 2014 and have also performed at Wacken Open Air.

The band’s founder, Jeff Waters (and guitarist, vocalist, songwriter, producer, engineer, mix engineer, mastering engineer, manager, etc.) was asked how it feels to be “back” touring his home country:

“I have always enjoyed flying the flag for one of the nicest countries and people in the world, despite having very little support from the industry here to play and releasing CDs in Canada. It sure is an honor to be nominated for a Juno, after all these years, and to have the opportunity to tour this great and metal land! It will be some of our best-ever shows this summer. We look forward to meeting the metal fans and to show them what the rest of the world has seen us do every year for decades. It’s about time, eh?!”

ANNIHILATOR has given the metal world a sound that is one of the clearest, most-tasteful mixtures of huge, metal riffs with the idea of the perfect song and some legendary solo shredding as the icing on the cake. Jeff Waters and ANNIHILATOR have been a major influence on countless well-known metal acts and musicians around the world. In fact, countless, successful non-metal acts & musicians cite Waters and Co. as an influence in their careers.