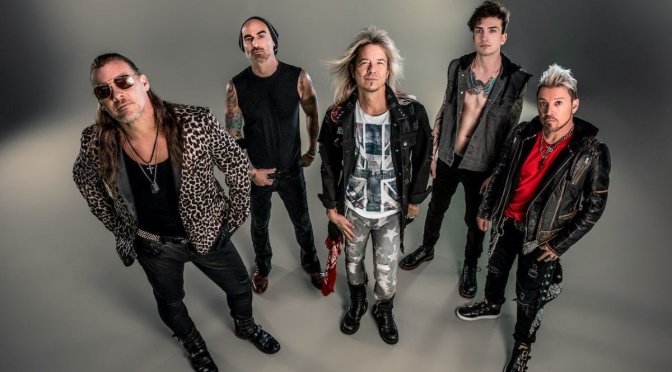 Rock powerhouse Fozzy have announced the release date for the vinyl of their latest studio album, BOOMBOX. It will be released in the UK on 11th November to coincide with their UK tour (4th – 14th November) and it will be released in mainland Europe on 25th November, both via Mascot Records/Mascot Label Group. You can order the album from here https://lnk.to/Fozzy

The band will be hitting the UK and Ireland run of their Save the World Tour next week. The ten-date tour begins in Manchester on 4 November and calls through Birmingham, Nottingham, Dublin, Belfast, Swansea, Bournemouth, Bristol, Glasgow and finishes in London on 14 November.  You can buy tickets and meet the band VIP packages from HERE. Support comes from Escape the Fate and Scarlet Rebels.

“After celebrating our most successful UK Tour EVER back in December…12 out of 12 SOLD OUT shows…we thought “how can we top this?” Chris Jericho says. “Well after much brainstorming and vodka drinking, we think we figured out a way….by booking our BIGGEST UK Tour EVER!!  We are teaming up with our bros in Escape The Fate to return to the magical kingdom that has always housed Fozzy’s largest and loudest fanbase, to Save The World once again and blow the roof off of the biggest venues we’ve ever played!  So come join us and sing Judas and I Still Burn louder than Lemmy, when we return to your amazing shores this November!”

Led by multi-hyphenate superstar Chris Jericho and acclaimed guitar guru Rich Ward, Boombox, was released on 6 May via Mascot Records/Mascot Label Group (ex-NA) on CD and digitally. PRESS HERE to listen. Their eighth full-length album was produced by Johnny Andrews and features the band’s anthemic “I Still Burn,” a Top 10 US Active Rock radio chart hit – their 3rd Top 10 single from the album and 6th straight Top 20 single. The 12-track collection also features their US Top 10 singles “Nowhere To Run” and “Sane.” Boombox and is the follow-up to their massive 2017 album Judas.

Chris Jericho shares, “Watching the fans and friends of Fozzy rock out to these new tunes nightly with open arms confirms that we were 1000% correct in waiting until the time was 1000% right to release what we feel is THE album of our career.”

After touring the world and building a loyal fanbase for the better part of twenty years, Fozzy is the epitome of what a killer rock n roll band should be: catchy, groovy, hooky, sweaty, and most importantly, a great effen time! In addition to their own successful headline tours, Fozzy has also shared the stage in recent years with the likes of Metallica, KISS, Iron Maiden, Avenged Sevenfold, Shinedown, Slash, Three Days Grace, and many more. These five seasoned pros light up every stage they play on with their electricity and charisma, making Fozzy one of the hottest rock acts in the world today. And with five consecutive Top 20 singles, Fozzy is steadily becoming one of the most successful bands on Modern Rock Radio.

In addition to their brand-new album, Fozzy recently celebrated another career milestone. Their breakout hit and Top 5 rock single “Judas,” from their album of the same name, was certified Gold by the RIAA in March, symbolizing sales of over 500,000. PRESS HERE to watch the “Judas” music video, which has been viewed more than 59 million times. The track is also heard by millions of fans worldwide, including on ITV’s hugely popular twice weekly All Elite Wrestling (AEW) shows.