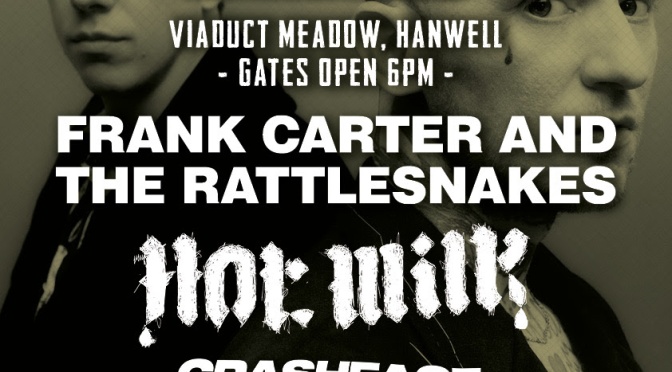 Marshall announce that joining headliners Frank Carter and the Rattlesnakes will be Hot Milk, Crashface and Lyoness to complete what is sure to be a truly stellar night celebrating the rich history of Marshall.

On Friday 6th of May Marshall will bring the world of Rock and Roll to Viaduct Meadow, Hanwell in honour of their 60th diamond jubilee in the form of Marshall Hootie – Loud At Sixty. The one-off festival will be headlined by Frank Carter and The Rattlesnakes and special guests to be announced.

Forever wanting to give back to his community the Marshall Hootie – Loud At Sixty is a special part of the annual Hanwell Hootie, which itself celebrates ten years in 2022. The Hanwell Hootie is an event that is incredibly close to Marshall’s heart and allows for talent of all ages to be given a platform where fans can experience and enjoy their music.

Tickets for Marshall Hootie: Loud At Sixty are priced at £15 including all fees and in support of Give A Gig week £5 from each ticket is donated to Youth Music. Tickets can be purchased here.

“60 years on from the first amp built for the next generation of artists, Marshall Amplification are celebrating their diamond jubilee in style with a headline performance from none other than Frank Carter and the Rattlesnakes.

With donations from proceeds going to Youth Music, the ongoing commitment from Marshall to honour Jim’s legacy will no doubt be as LOUD as ever.”

About Frank Carter and The Rattlesnakes:

Formed in 2015 by front-man Frank Carter and guitarist Dean Richardson, Frank Carter and The Rattlesnakes have been taking the world by storm. The band have headlined legendary venues such as that of O2 Academy Brixton, Alexandra Palace  have been support to the Foo Fighters and just last year were headliners for 2021’s Download Pilot.

During this time the band have released four studio albums, their latest being ‘Sticky’ in October 2021 to huge critical acclaim charting at number 8 in the UK Albums chart and number 2 in the UK Independent albums.

Now celebrating their 60th year Marshall Amplification has become so much more than a leading amplifier manufacturer. Since launching MarshallRecords five years ago, Marshall have continuously been forging forward in aim to give back to communities all over the world and support talent that would have made Jim proud.

Marshall have now got an even larger presence in the live industry with the creation of the MarshallLive Agency and during 2021 have also launched the Marshall Studio on site in Bletchley. A studio that is state of the art and available for artists signed to Marshall Records as well as for any artist that wishes to hire the space.

In February Marshall recently announced a move towards education partnering with Music Learning Collective to create a platform that has musicians in mind allowing for industry insight to be shared among up and coming musicians.

Watch the video below to find out even more about Marshall.