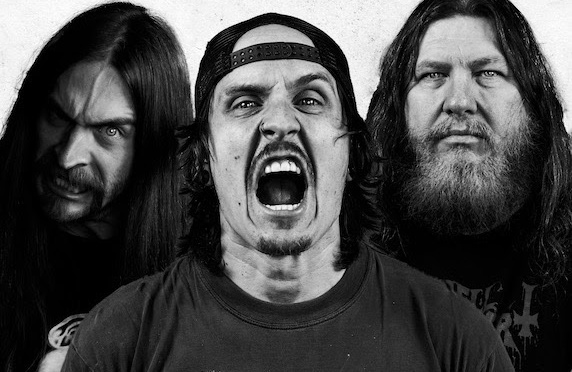 Florida death metal vets INHUMAN CONDITION have released the first new song, “Recycled Hate,” from their eagerly awaited sophomore album, “Fearsick,” that’s due out on July 15th. The trio, which features vocalist/drummer Jeramie Kling (VENOM INC, EX-DEO, THE ABSENCE), guitarist Taylor Nordberg (DEICIDE, THE ABSENCE) and bassist Terry Butler (OBITUARY, DEATH, MASSACRE, SIX FEET UNDER), will onceagain be self-releasing the album on Kling/Nordberg’s own Listenable Insanity Records. In addition to the 9 new blistering tracks, the band has recorded a series of cover songs to be delegated to the labels they have signed license deals with for their CD releases.

The new single is accompanied by a music video filmed by Deidra Kling and edited by Jeramie Kling. Watch below.

“The release of Recycled Hate is extra special for us, not only because it launches our second album, but also because it was the first song that was written by Jeramie and I for the albums that became Rat°God and Fearsick back in the fall of 2019. It’s also worth noting that our good pal Paul Mazurkiewicz wrote the lyrics and vocal patterns for this song. We can’t wait to unleash the rest of the album and hit the road this summer!”

About INHUMAN CONDITION:
Spawning from chaos, Inhuman Condition came to life with all guns blazing in the fall of 2020. With an album and a half of material from what was to be a new Massacre album, Jeramie Kling (vocals, drums – Venom Inc, Ex Deo, The Absence) and Taylor Nordberg (guitars – Deicide, The Absence) joined up with Terry Butler (bass – Obituary, Death, Massacre, Six Feet Under) to form a new band and to self-release their debut album “Rat°God” on Kling and Nordberg’s own Listenable Insanity Records on June 4th, 2021. The album was hailed with rave reviews and the group went on to do 2 tours in the United States in support of the record.

Wasting no time, the band wrote and recorded their second album, “Fearsick,” in 2019 and 2021 with mixing by Kling and mastering by Nordberg at Smoke & Mirrors Productions.