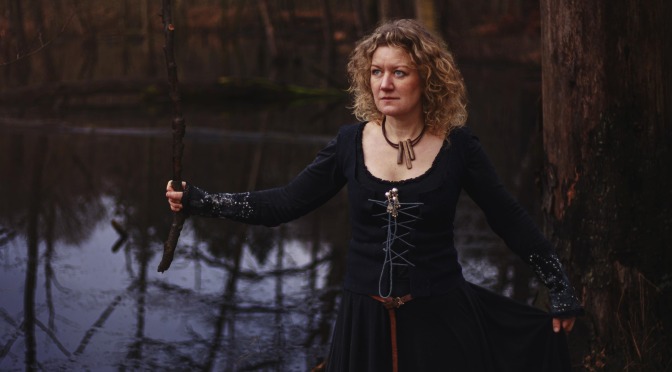 By Norse is proud to announce the signing of Nanna Barslev to its roster! Nanna is a renown Dark Nordic Folk, Neofolk, Viking music artist and composer from Denmark. “Lysbaerer”, her first full-length solo album is the outcome of Nanna’s solid experience in the Nordic Atmospheric / Dark Folk genre since the early 1990’s and known as the front woman in Huldre, Asynje, Gny and Ættir.

Nanna performs not only as a singer with her mesmerizing voice and experimental old Nordic song techniques, she also appears as a instrumentalist on a collection of various traditional Nordic instruments such as Moraharpa, Tagelharpa, Islandsk langspil, Bodhran drum and flute. She has performed at various Viking medieval folk and Metal festivals such as Wacken Open Air, Copenhell, Midgårdsblot and Castlefest.

She comments on the signing to By Norse Music: “I am proud and excited to announce that I found the perfect match with By Norse music, to help me lifting my music into the world.I’m thrilled to be a part of the By Norse family, and I feel lucky to be among wonderful artists such as Wardruna, Tvinna, Eivør and all the other marvellous ones with solid experience, sharing the same genre energies and roots.”

Her debut solo album “Lysbærer” is set for release on March 18th on Digital and CD Digipack with 20-pages booklet featuring all lyrics and English translations. Regular and limited vinyl editions with printed innersleeve featuring all lyrics and English translations will come on May 6th. All formats are available for pre-orders in the By Norse online stores:

In “Lysbærer”, Nanna invites you into a hidden world between dark and light in nature and human nature, from misty underworld roots to ancient mountain calls, from scenic battle fields to meditative healing spells, with protection spells and words from the Edda.

The album title “Lysbærer”, which translates to “Carrier of light” is a reference to the celebration of the Sun and the Moon, lighting up the dark and changing seasons. The circle of life and death connecting with nature and the nature in us humans. The dark and light theme is the main essence of the vision in this album and follows up with the theme of chaos and cosmos from Nanna’s previous single “Skelfr Yggdrasil” released in 2019.

Interpretation of Nordic folklore and mythology themes are one of Nanna’s signatures, expressed through her mesmerising and fascinating voice, that ranges from experimental old Nordic singing techniques to underworld growling and whispering.

Nanna Barslev comments on the album: “Through the process of making this album, I’ve been diving into the melancholic roots and energies with a fire torch in my hand, searching in the dark for what could be healed. I crossed all boundaries from what I thought I was capable of as an artist and put my feelings and soul in it. My wish is that the listener can relate to themes and feelings in this album and carefully be lead through the misty fields and the sunny meadows.”

”Lysbærer” was produced by Fieke van den Hurk (Eivør, TVINNA) in Dearworldstudio, the Netherlands. Together for “Lysbærer”, Fieke and Nanna have found a sound that reflects the heritage of Nanna’s previous projects, bringing together momentums ranging from Metal, distorted Folktronica, crispy sounds and heavy beats. The album was mastered by Iver Sandøy (Enslaved, Ivar Bjørnson & Einar Selvik). It features guest appearances by the Dutch musician Lies Sommer (Ball noir) on the hurdy gurdy and harp.

“Skjoldmø” (Shielmaiden) refers to an old Norse description of women who participated in the battles with axes, swords and shields. “The lyrics are inspired by a description in Saxon gramaticus about shieldmaidens going into battle by blunting the swords of the enemy with spells songs / galder. My interpretation of the shield maiden theme touches the problem of fighting inner judgment, a battle between strength and weaknesses as well as judgement from the society through the history. To find the strength of standing together, supporting each other instead of fighting each other”.  – Nanna Barslev

The video Skjoldmø was filmed at Høje Stene and organised as a workshop for Danish reenactment Viking women and produced is by Mark Thyrring.