It’s almost that time of year again, Finnish metal festival season will be opened, once again, by the most anticipated underground black/death/obscure metal festival in Finland: Steelfest! Located in the heart of Hyvinkää, this year the festival has included an official camping area for those who would rather not be confined to the walls of a stuffy hotel. They also posted on Facebook that a few gracious locals who are attending the festival are offering a couch (or dark corner) to sleep in for those coming from far away.

This festival has really become a globally known legend. Based on a poll posted on social media, people are hailing from over forty different countries, not including the bands, to experience such an epic event here in the cold, dark (but hopefully not too cold or dark during the festival) north.

The festival will begin with a sold out Pre-party at Crafters the Thursday before the festival at 20:00 featuring Havukruunu & Kalmankantaja. 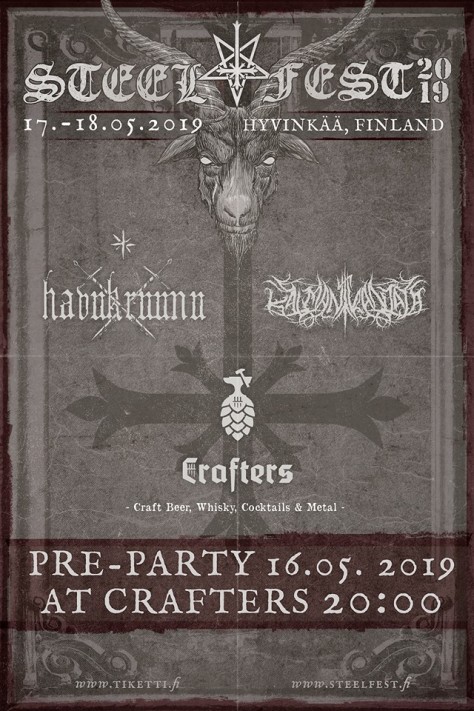 As for the lineup – Seigneur Voland (Fra) not only will be performing for the first time in Finland but will perform an excluive 20th anniversary show based on material from 1999-2019).

Marduk (Swe) will also be performing a 20th anniversary show to celebrate “Panzer Division Marduk”’s 20 year existance. This performance will only happen once, it cannot be missed!

Vital Remains (US) will also have their debut appearance in Finland!

We will also get a double shot of Mr.Spellgoth himself with appearances by both Horna and Trollheims Grott.

Along side these legendary performances, the lineup includes:

Here is the day schedule as of right now:

Tickets can be purchased from KVLT Records or Tiketti.

Check out our Spotify playlist to get hyped!