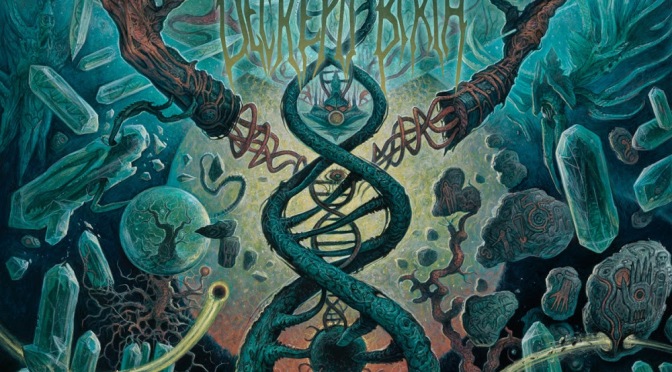 U.S. techincal death metallers DECREPIT BIRTH have revealed a second new single from their upcoming album, “Axis Mundi”. The song is titled “Hieroglyphic” and its lyric video can be watched here:

The previously revealed single, “Epigenetic Triplicity”, can be listened to HERE.

Formed in 2001, DECREPIT BIRTH released three studio album’s to date, which got them a premiere spot on the death metal radar. Their music, infused with technical and progressive twists, managed to forge a very solid international fan base, and continues to forge their path into the future, as one of the genre’s finest bands. Awakening from a seven-year slumber, the Californians fourth offering is entwined with musical athleticism and characteristic esoteric themes. “Axis Mundi” is as crushing as it is cosmic.

“We’ve gone through an evolution throughout the years” says founding member and primary songwriter Matt Sotelo. “The last couple of albums we had, Diminishing Between Worlds and Polarity, were more progressive death metal. They were different from …And Time Begins, which is a different genre of death metal. It’s more brutal. I’m the type of guy who likes to experiment. …And Time Begins has no solos. It’s all really fast palm-muted riffs. The other albums breathed more with the guitars. I let chords ring out on Diminishing Between Worlds and Polarity. Axis Mundi is combination of all the stuff I’m into. I like it a lot right now. It’s more melodic. The riffs repeat intentionally. I want to have fun with these songs”.
#darkartconspiracy #metal #music #news