Seems that the TOOL has decided to fund another year in studio..or something else with their fans and offer “AN IMMERSIVE DISSECTION WITH DANNY CAREY, JUSTIN CHANCELLOR AND ADAM JONES”

Anyways, when taking a look to TOOL’s facebook wall can see that fans aren’t happy. 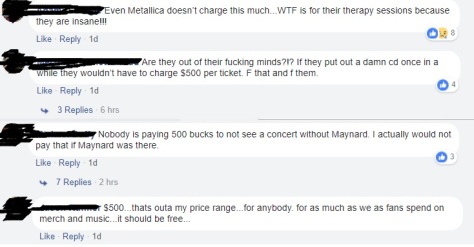 “Tool, one of rock music’s most mysterious and speculated about bands, give fans a rare glimpse behind-the-scenes via a series of intimate music clinics. The discussions include drummer Danny Carey, bass player Justin Chancellor and guitar player Adam Jones walking attendees through a handful of the band’s songs, from the process of writing them to playing them live. Audience members are encouraged to ask questions via an open discussion, as well as mingle with the band following the session.”