The newest album of Polish black/death metal tyrants Azarath has the right name. “In Extremis,” meaning “at the point of death” or “under extreme circumstances” in Latin, is a non-stop assault of extreme death metal that takes no prisoners. The anticipated album arrives six long years after its predecessor, “Blasphemers’ Maledictions” (2011).

Azarath was formed almost two decades ago by drummer Inferno (of Behemoth fame), and he is currently accompanied by Bart (Armagedon, Damnation) on guitars, Necrosodom (Anima Damnata, Deus Mortem, ex-Infernal War) on vocals and guitars, as well as Peter (ex-Lost Soul) on bass.

Stylistically, the album is a demonic concoction of death metal influences: Polish extreme death metal with its relentless riffs, ominous melodies and unearthly growls, and old school death with its chaotic, screeching guitar solos the likes of Morbid Angel.

Even the album cover evokes the feel of old school death. The cover art itself was done by Marta Promińska (Hypnagogic Painting).

The first track wastes no time with foreplay. “The Triumph of Ascending Majesty” immediately punches you in the face with screaming guitars, brutal vocals, and galloping drums which tick away like a bomb ready to explode. There’s a breakdown in the middle of the track which gives the listener a bit of breathing room. And the end of the song rolls out with an ominous melody played backwards.

The album mercilessly trudges on. “Let My Blood Become His Flesh” and “Annhilation (Smite All the Illusions)” include more non-stop, break-neck riffage and chaotic solos.

“The Slain God” changes things up with a more expansive, melodramatic sound that is evocative of Behemoth. Inferno gets creative on the drums, and there are clean, spoken vocals thrown in at the four minute mark, which seem very Nergal (vocalist of Behemoth) inspired.

“The Sign of Apophis” has a gritty, old-school black metal feel, opening up with Necrosodom doing some weird animalistic noises.

The last song on the album, “Death,” is a quiltwork of unholy madness, alternating between chaotic riffs, pinch harmonics, ominous melodies, heavy blasts, and screaming solos spiraling off into the pits of hell.

Throughout the album, the band rarely stops to take their foot of the gas. Head banging to it would probably result in injury. While the tireless, fist-punching brutality and unrelenting riffage may be a part of its trademark sound, it also makes it difficult to stop and process what is going on at times. Some songs could easily bleed into the next, or be mistaken for one another. But for Azarath fans, and fans of the genre in general, “In Extremis” is definitely an album crafted by talented musicians, and is well worth checking out.

Recorded in various locations between March and November 2016, the album was mixed and mastered by Haldor Grunberg at Satanic Audio. Graphic design and layout were done by Mentalporn (Behemoth, Origin, Decapitated) with calligraphy provided by Ihasan Art and additional work by Holy Poison Design.

“In Extremis” is available in a variety of formats:

Pre-orders are available at: 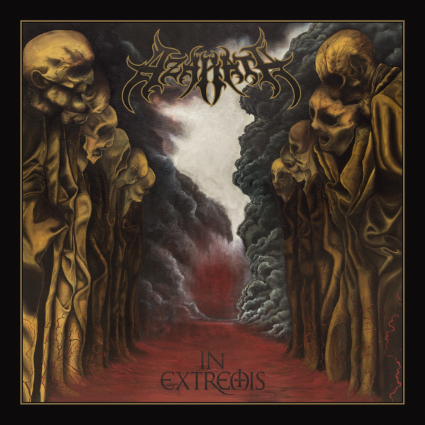 One thought on “REVIEW: AZARATH – IN EXTREMIS”