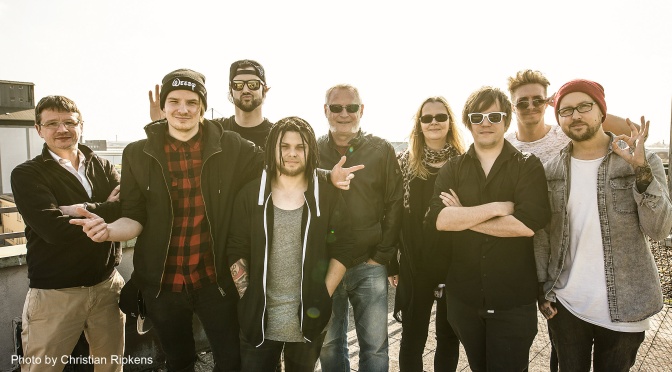 ESKIMO CALLBOY, the modern metal six piece from Castrop Rauxel, have kicked up a lot of dust not only in their native Germany, but also internationally. Their latest two albums landed in the German Top Ten Album Charts, “We Are The Mess” (2014) on #8 and “Crystals” (2015) on #6, they toured Europe with the likes of Callejon, Papa Roach, Five Finger Death Punch and Asking Alexandria and played high profile festivals such as Wacken Open Air, Summer Breeze, Open Flair and Nova Rock. Moreover, ESKIMO CALLBOY already toured countries such as Japan, Russia, China and South Africa and played a full US tour with Deuce and Kottonmouth Kings.

After following the band working their way up from sweaty, local clubs to big international stages Century Media Records/People Like You Records are excited to work the band worldwide.

Wolfgang Funk, Label Manager People Like You Records: “We are really happy about signing a young and up-and-coming band that will leave additional marks in the international scene. Moreover they are adding another flavour to the People Like You roster that we are going to keep working on. We are really looking forward to an exciting and successful cooperation with the band.”

Kevin Ratajczak, ESKIMO CALLBOY: “After more than 2 years of working on our 4th studio album we are holding the first masters in our hands – finally! We put in more blood, sweat and tears than into any other album before and we are absolutely sure that it’s the best we ever did. It’s a total cliché, but it’s true! We are really happy to release it via Century Media Records/People Like You Records. With all their experience and the close contact we kept during the past few months, we are sure that we can take ESKIMO CALLBOY to the next level.”

The first single will be released in May while the upcoming album will be due in the late summer, so keep your eyes peeled for more news soon.

The band will only play selected shows and festivals during the summer and prior to the album release.