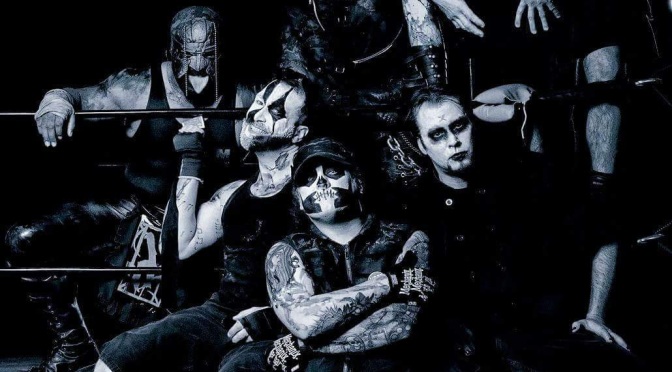 Las Vegas, NV based metal band Death In Motion have released the Official Music Video for “Darkly Dreaming.” Filmed, directed, and edited by Chaz Dray, “Darkly Dreaming” is off of their 2014 album, Dias de Los Muertos.

Death in Motion (diM.) is the only efficient words to describe the atmosphere that develops around these 6 devious minds. From their dark beginnings in February of 2006, through multiple lineup shifts, and all the way to their undeniable present, diM. has showed unrelenting grit and drive towards their goals. diM. continues to show no weakness on their journey forward.

Starting from the spine, TwiTch, with thunderous double bass, tribal tom, earth shattering snare, and crashing cymbal work, he can take a distant thunder storm and turn it into flashbacks of a World War battlefield. Mr. Blight, bringing a low tone with skills from lightning fast pulls and slaps to purring placed plucks of the strings. Often immitated, never duplicated. CarveR, dark ambience and murderous sounds follow his wake as he spews the sounds of a wraith into an unexpecting crowd. Onto the dastardly duo on guitars, bAstArd the Clown and AsheS, combining mystic melody with grinding brutality. Swaying leads, fast crushing riffs, healing melody. Between the two, the bag of tricks is never empty. And finally the centerpiece, BeAsT. With a voice born of both angels and demons, he will sing you a sweet sleepy lulliby only to bring you into his vocal nightmare. Be prepared for abusive seduction.

With unwavered dedication and a growing loyal fanbase, diM. has marched into many of Vegas’ best known venues from The Cheyenne Saloon to even the grand stage of the House of Blues, opening for some the most well known national acts (Fear Factory, Mushroomhead, Motograter, Divine Heresy, Agnostic Front, Spineshank, just to name a few). The future holds an air of mystery, but one this is for sure. As the sunsets to dusk, diM. will bring the Days of the Dead in the fading lights wake.