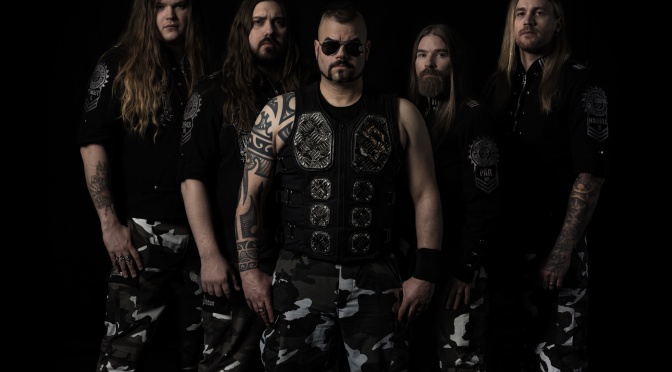 Recently, Swedish metal titans Sabaton announced their new collaboration with World of Tanks and premiered an unrivalled music video for ‘Steel Commanders’.  Pioneering some hyperrealistic visuals of the band and their Grammy Award-nominated special guest, Tina Guo, in epic war scenes, the video clip was viewed over 3.6 million times within the first three weeks of its release.

After offering fans and gamers the chance to see them as crew members on the new Strv K tank, the first-ever Tier IX premium vehicle in World of Tanks, Sabaton have now answered the calls from fans asking for the song to be made available via all music streaming platforms!

Hop into your tank and download or stream ‘Steel Commanders‘ here now:
https://music.sabaton.net/SteelCommanders

Today, the Swedish metal force also unveils a lyric video, inspired by the sketches that were used for the production of the official music video for the song:
https://www.youtube.com/watch?v=3QRkn_lxpec

About World of Tanks:
World of Tanks is the first team-based, massively multiplayer online action game dedicated to armored warfare. Throw yourself into the epic tank battles of World War II with gamers all over the world. Your arsenal includes over 600 armoured vehicles from 11 nations, carefully detailed with historical accuracy.

About Wargaming:
Wargaming is an award-winning online game developer and publisher headquartered in Nicosia, Cyprus. Operating since 1998, Wargaming has grown to become one of the leaders in the gaming industry with 5,500 employees and 18 offices spread all over the world. Over 200 million players enjoy Wargaming’s titles across all major gaming platforms. Our flagship products include the free-to-play hits World of Tanks and World of Warships, as well as World of Tanks Blitz — the critically acclaimed mobile tank shooter with cross-platform support.

In the more than two decades since their launch, Swedish metallers Sabaton have gained a legion of loyal fans across the globe by carving out a reputation as one of the hardest working bands in the business, an assessment shared by the UK’s Guardian: “Other than veterans Iron Maiden, Sabaton is the biggest heavy metal band in Europe.”

The band has earned eight Metal Hammer Golden Gods Awards nominations, taking home the award for “Breakthrough Artist” in 2011 and “Best Live Band” in three different years, and a Grammis nomination (Swedish equivalent to the U.S. GRAMMY) as Best Heavy Metal Band. Sabaton has amassed more than two-billion streams across all streaming platforms, and more than 1.5-billion YouTube views. Over its 20-year touring history, Sabaton has headlined major festivals and sold-out arena concerts around the world.

Just recently, the band not only announced their new studio album “The War To End All Wars” but also their “Tour To End All Tours”: In Spring 2022, Sabaton will be visiting 26 cities in 17 countries, bringing their ground-breaking modern metal to the people and delivering breathtaking live shows in a setting that will once again set new bars for concerts of this kind. Sabaton will be supported by Mongolian rock band The Hu and Finnish heavy metal veterans Lordi.

Get your tickets here:
https://www.sabaton.net/tour/