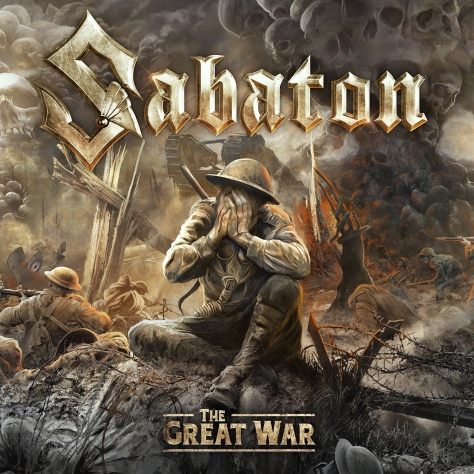 Swedish power metallers Sabaton are back doing what they do best. Being known for their main lyrical themes of war, historical battles and events, their new ninth album ‘The Great War’ doesn’t disappoint. This time they dive into the bloody and gloomy atmosphere of World War I which took place during 1914-1918.

Opening song ‘The Future Of Warware’ is symphonic, massive and epic in every detail, aided especially by soaring skilled guitar work. It is a grand way to start which is all-consuming and sets the scene wonderfully as well as displaying power metal as it should be…

Melodic powerful riffs open ‘Seven Pillars Of War’ and continues to be crushing throughout. Driven and stand out guitar work carries it to higher ranks and yet again another big chorus features which you come to expect.

’82 nd All The Way’ takes a slightly different approach, not being as fast and charging but goes on to be extremely catchy with bouncy riffs and lots of synth keyboard sounds, giving it a more mainstream less heavy vibe but it is very well done.

Fast-paced ‘The Red Baron’ starts with dark keyboard synths which are thrilling yet sinister, once it gets going it is seriously catchy and bombastic, fuelled with energy throughout. This is a cracking track with a huge unforgettable chorus and exudes atmosphere.

The title track ‘The Great War’ follows and immediately grabs your attention with a choir intro. The more stripped back verses aid the storytelling and brutal yet true reality of war with well written and emotive lyrics such as:

“I’m standing here, I’m full of fear,
With bodies at my feet,
Over there, in the other trench,
Bullets wear my name”

Everything in this song has so much power and is perfectly placed to create the ambience and atmosphere needed and to carry it further. It is very epic sounding throughout as you would expect from the title track and sums up the album and the context masterfully.

The first single released ‘Fields Of Verdun’ gets straight to it and is a solid heavy and infectiously catchy track with a frantic feel to it and features perhaps some of the finest guitar work, something which this is luckily no shortage of throughout the entirety of the album.

‘The End Of The War To End All Wars’ starts with a sorrowful into then it hits you with everything that it has, powerful vocals, dramatic synths and crushing guitars and backing vocals, it charges along like a battle itself with many twists and turns but always sounds majestic whilst doing so.

Closing song ‘In Flanders Fields’ is the shortest offering and the most beautiful and fitting way to end this conceptual and historic album with Canadian physician Lieutenant-Colonel John McCrae’s war poem of the same name being sung in this emotive and unexpected rendition.

‘The Great War’ tells the battle of such a historic event and Sabaton delivers this in a stunning way, making it one of their strongest releases whilst quintessentially sounding like them still. It is extremely atmospheric, compelling and expertly and technically crafted, sounding epic and grand to the very end as well as being emotive and realistic especially through the well-written lyrics.