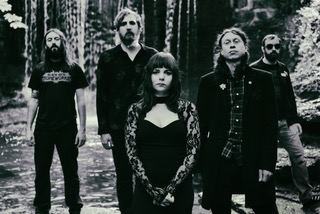 ‘Yn Ol I Annwn’, Welsh for ‘Return To The Underworld’, is the third part of a trilogy of albums from Mammoth Weed Wizard Bastard that began with ‘Noeth Ac Anoeth’ in 2015 and 2017’s ‘Y Proffwyd Dwyll’ (which got them nominated for the Welsh Music Prize in 2017). The band have now shared the 2nd track from the upcoming album, ‘The Spaceships Of Ezekiel’ –

Guitarist Paul Michael Davies comments, “The Spaceships Of Ezekiel is based on a book of the same name written in 1974 by Josef F. Blumrich. This guy was a NASA engineer who set out to trash the book ‘Chariot Of the Gods’ by Erik Von Daniken, a book that claimed that ancient astronauts or aliens were mentioned in the Bible. Being an actual rocket scientist, Blumrich set out to disprove these theories but as he was researching the book,  he started to come to the conclusion that this shit could have actually happened! It’s a crazy fucking book but also cool. In it he breaks down the book of Ezekiel in the old testament and even includes actual diagrams of what the spaceships may have looked like. Wes (MWWB 2nd guitar) is a UFO nut so the song had to happen. It also fits in with the theme of the album too.. To us its a slab of mad 70s Sci-Fi literature put through the MWWB Filter.”

The eight songs that comprise this album, sees the band delve deeper into their collective influences, embracing full on space rock, atmospheric film soundtracks, melancholic acoustic interludes, psychedelia, cosmic moog’s and percussion, moments of introspection and light … and of course, large helpings of doom. The fat riffs, big hooks and endless space grooves are all present and correct.

And once again Jessica Ball’s voice glides over it all, both sweet and melancholy, yet this time more assured. A myriad of stacked harmonies and layered vocals weave in and out of the tracks, adding an ‘other-worldly’ melodicism to the songs. No one else is pushing the boundaries of heavy like MWWB. Mammoth Weed Wizard Bastard sound like Mammoth Weed Wizard Bastard, full stop.

‘Yn Ol I Annwn’ is set to land on March 1st 2019 and will be available on CD/DL and limited edition double vinyl. First pressings will be housed in a gatefold sleeve. With a Green/Blue marble version and an Amber and Red disc version. Full download included.