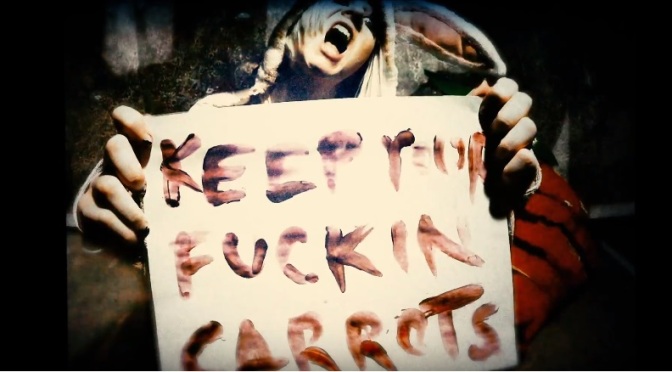 Taken from Snovonne’s third studio album “The Child and The Bitch”, “Bullsh?t” is the fourth music video to emerge from her latest project. Stepping outside the lines of her typically dark and creepy elegance, the playful new video pulsates with vibrant color and cartoon-ish texture. Snovonne sports a white onsie and a bunny hat, going through what could only be described as multiple stages of anger and/or anger management.

Never lacking any irony – after smudging your pink screen with paint and expressing her temper holding a pocket-sized chihuahua, Sno moves on to raise her sledgehammer to a large stuffed carrot.

Watch the video for “Bullsh?t” below:

Speaking about the video, Snovonne said: “It’s a caricature of anger. Naturally, I wanted to visualize what the song represents. A state of mind that’s past anger – when you just want to stand on your head and laugh maniacally, otherwise you’ll explode. There’s not much logic left at that point… being a decent human being got you nowhere, so you lose respect and feel like ridiculing everything, including yourself, because that’s at least fun. People ‘dangling carrots’ in my face is something I despise with a passion, so carrots had to make a cameo, one way or another. Bunnies, sledgehammers, chihuahuas – I figured it would make a great psychadelic cocktail. I’m a big fan of 90’s music videos – the saturated and un-clean, and ‘Bullsh?t” gave me the opportunity to push in a different direction than usual. Mainly, I wanted to have fun. The people I wrote this song about take their egos way too seriously.”

Snovonne is currently working on the stage production for a string of cabaret-themed shows. Carrying the work title “Snovonne’s Nightmare Cabaret”, it will incorporate video projection and various performers into a show based on concepts of the last two albums: “The Nightmare Bride” and “The Child And The Bitch “.

You can support Snovonne’s art in Sno-Ville. Subscribe here and get exclusive subscriber-only deals!

Check out also her latest videos